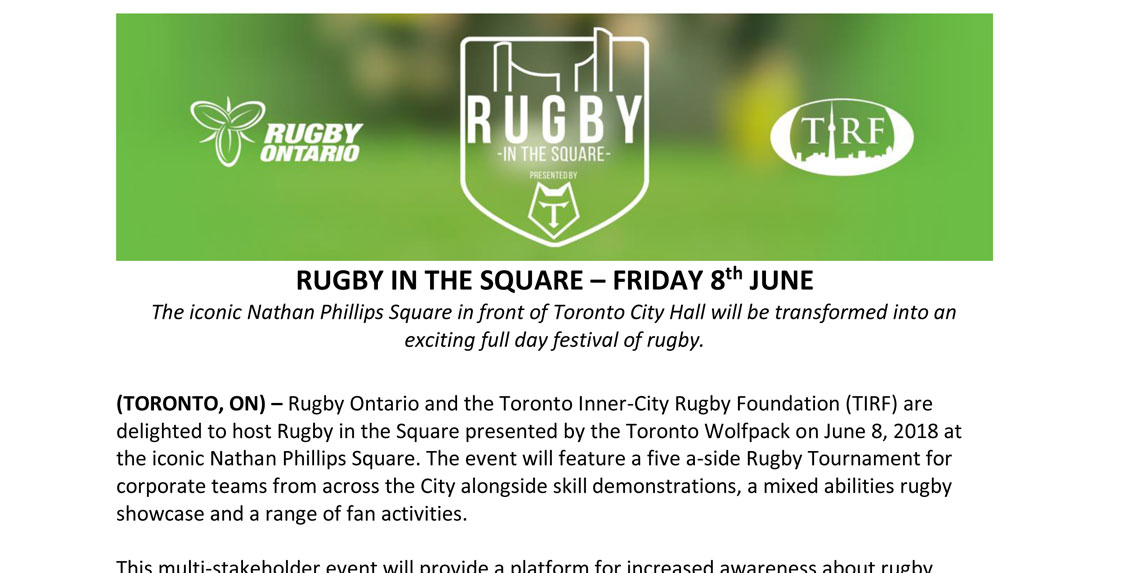 (TORONTO, ON) – Rugby Ontario and the Toronto Inner-City Rugby Foundation (TIRF) are delighted to host Rugby in the Square presented by the Toronto Wolfpack on June 8, 2018 at the iconic Nathan Phillips Square. The event will feature a five a-side Rugby Tournament for corporate teams from across the City alongside skill demonstrations, a mixed abilities rugby showcase and a range of fan activities.

This multi-stakeholder event will provide a platform for increased awareness about rugby programs in the province of Ontario, while raising funds to support future rugby champions. Toronto Wolfpack, the city’s professional rugby league team, will proudly support the event as presenting sponsor.

Rugby in the Square’s Fast-Five Flag Rugby will combine skills from Rugby Union, Rugby League, Rugby 7’s and tag rugby. The event’s round-robin tournament invites 12 pre-registered teams to play a minimum of three 20-minute games on turf playing surface. The top four teams have the chance to compete for the tournament championship. Toronto Wolfpack players will feature on the day as the team heads into the heart of their season in Toronto.

An Après Rugby Reception will follow the event which includes celebration and a silent auction. Taking place at the nearby Quinn’s Steakhouse, participating players will be invited to enjoy food and drinks together after the game – in true rugby fashion.