While the summer Community Rugby Program is already surpassing numbers from 2016, TIRF wants to continue to improve the team’s ability to effectively communicate with the kids served through rugby and each other. 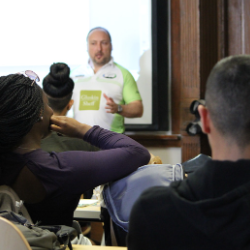 While the summer Community Rugby Program is already surpassing numbers from 2016, TIRF wants to continue to improve the team’s ability to effectively communicate with the kids served through rugby and each other. Featured guest speaker, for the first summer Professional Development Day, was TIRF’s Co-Founder and member of the Board of Directors, Bill Di Nardo.

During his presentation, Mr. Di Nardo referred to himself as, “a Jack of all trades and a master of none”. What he demonstrated, through his example, was the forgotten portion of that phrase, that a Jack-of-All-Trades is “often better than a master of one”. Mr. Di Nardo has built companies, from the bottom up. He has had successes. He has had failures, and he learned from each and every one of them.

Mr. Di Nardo shared his entrepreneurial journey and related it to his experience working with grassroots organizations and the non-profit sector. TIRF started out as an idea, an idea that Mr. Di Nardo took a chance on. It began with a conversation with few like-minded people in his basement. Six years later, the idea blossomed into a program that is impacting Torontonians across the city. “You have to be able to take risks as an entrepreneur,” said Mr. Di Nardo.

What was surprising to many of the summer staff who consider Mr. Di Nardo as a personal role-model, was that even as a serial entrepreneur, he too was consistently seeking out mentors of his own. Mr. Di Nardo spoke about surrounding himself around goal oriented people. People that shared a passion for creating social change, have an ethos of philanthropy, and supporting youth and the community.

The afternoon session started with “PowerPoint Improv”, led by Amanda Neale-Robinson, TIRF’s Communications Officer. Working with summer staff outside of the normal staff teams, groups of four or more, went through learning exercises that forced them to think on their feet.

At first, the workshop seemed like a fun game but, there was a lesson here. In situations, like while summer staff are doing program outreach, there is a need to be able to quickly try new strategies to be able to effectively communicate with those around you. Adaptation is a major skill utilized by the summer staff who are learning to cope with new experiences every day.

Continuing with the theme of problem solving, Paul Myers, TIRF’s Rugby Development Coordinator, spent the remainder of the afternoon working through problem solving scenarios with the group. Topics ranged from plausible situations of kids arguing, crying, and not wanting to participate.

Each region, York, Scarborough, Etobicoke and Don Valley were given different situations in which the results were shared and discussed with the entire group. By giving their own personal accounts and behavioral-based experiences, summer staff were able to share what worked for them.

The Professional Development Day concluded with two summer staff being recognized for their hard work, enthusiasm, and attitude to supporting the program. Jessica Watt, and Dashawn Stevens were voted as staff of the month as they exemplified TIRF’s values of respect and passion.

Special thanks to Mr. Di Nardo for inspiring the group. Summer staff were honoured to hear Mr. Di Nardo’s advice and look forward to leveraging it through their experiences with the summer Community Rugby Program, and applying it to future long-term goals.