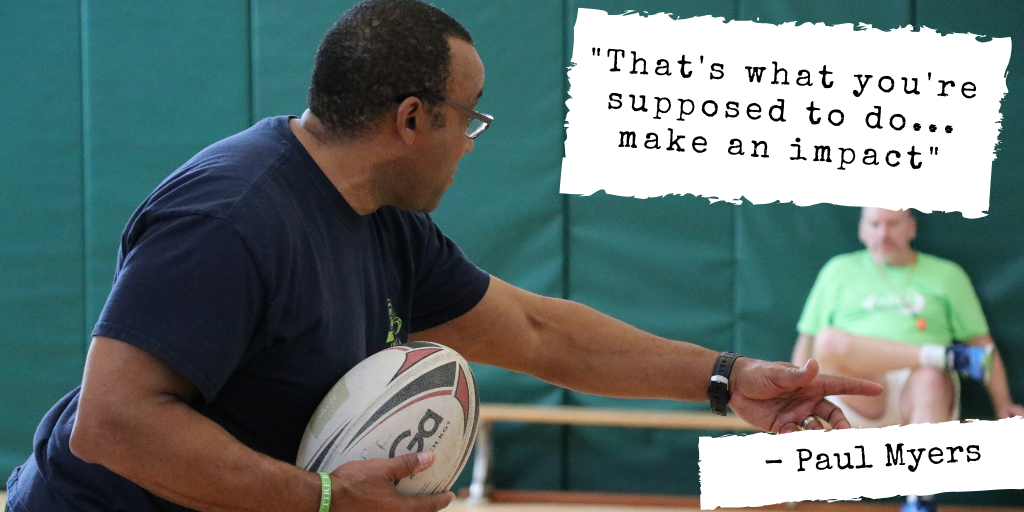 TIRF recognizes Paul Myers for his seven years of dedication to improving lives through rugby.

At TIRF, the best way to celebrate a retirement is with surprise touch rugby, pizza and samosas.

TIRF’s Coordinator of Rugby Development, Paul Myers, recently announced his decision to step away after seven years transforming lives through rugby. Paul insisted there be no party and especially no cake, but such an important member of the team deserved to be recognized.

Executive Director Amanda Neale-Robinson and Special Events Captain Hailey Shouldice collaborated during the week to plan the celebration, while Programs and Outreach Coordinator Amanda Cacilhas took on the important role of diverting Paul’s suspicion while TIRF staff gathered at Ramsden Park, in East York on Friday, June 7. Amanda C., who has documented her “love of being stressed out” in her staff biography for TIRF, used this trait as a tactical advantage.

She really needed to get away from the office and talk to Paul about her stressful week over lunch. Meanwhile, following the Regional Captains meeting at the office that morning, Hailey and Amanda N. sent TIRF staff to pick up the pizzas and samosas and stake out a spot at Ramsden Park.

By the time Paul and Amanda C. finished lunch and started their walk to Ramsden, two dozen members of TIRF staff had hidden themselves under the shade of a hedge—which was challenging with six people wearing TIRF’s bright green shirts.

Newly-added Rugby Facilitators, established Regional Captains, and Office Administrators were all present to congratulate and appreciate Paul on his wonderful work and well-deserved retirement. Paul made a brief speech commending all members of TIRF staff for their own  roles in improving the lives of youth through rugby programming throughout the city. 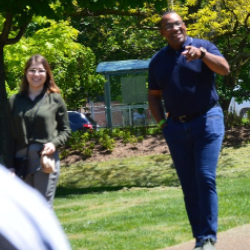 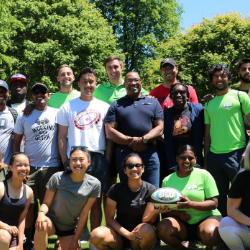 After everyone had a chance to partake in pizza and warm samosas, TIRF staff started to split up into teams to participate in the sport they all share: rugby. While other parkgoers walked their dogs, played pickup basketball, sunbathed, and generally enjoyed the clear 20-degree day, TIRF set up an area to play touch and flag rugby.

Paul stayed away from the games for several minutes, but evidently couldn’t resist getting involved in some way. He took the field as a referee when Don Valley Regional Captain Arielle Dubissette-Borrice and Office Administrator Thomas Davidson, who had been refereeing most of the games, decided to take their considerable talents onto the field.

Experience was no factor in success on the pop-up field that Friday. Players who have represented Canada were tackled many times, and newly-trained rugby facilitators scored impressive tries.

The appreciation for Paul didn't end on Friday afternoon. On Wednesday, June 12, TIRF Office staff hosted a second party on the 16th floor of 77 Bloor. Office neighbours from Avana Capital Partners, Maytree Foundation, Transparency International, and Publish What You Pay, came to give Paul their congratulations.

The party was 'P'-themed: there were peanut M&Ms, potato chips, and popcorn to snack on; the punch included pineapple juice. Cut-outs of Paul's face were placed around the room as an amusing touch.

Paul gave a second short speech, though he remarked he was "not very comfortable with [the recognition] because that's not who I am." Paul commended the staff of Maytree for their work towards making housing a legislated human right across Canada, which is a step towards social and economic equity across the nation.